Yesterday, my family put on a yard sale for my aunt, helping her clean out an entire storage unit. After the third time moving a two-ton table – barely a hyperbole, I swear – I realized that to most people, a group of only women moving heavy furniture across the city might seem a little strange. Typically, that’s a man’s job. But it’s all we’ve ever known. Heavy lifting is just as much a job for me as cleaning the house is – but let’s be real, I probably do even less of the latter. One of the greatest benefits of growing up with two moms is that I was raised in a world without gender roles. Nothing’s off limits. Below is the main college essay that I wrote for Stanford about just that, and I felt like today was the perfect time to share it. Happy Sunday, y’all. Breaking gender stereotypes again today, but this time, because I’m chilling on the couch watching baseball. 🙂 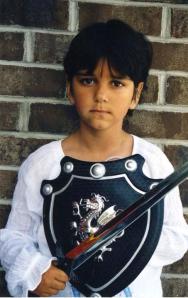 “I come from a family of lady dragon-slayers. They don’t charge through walls of fire or wear a suit of armor – although we do have a medieval sword with my name inscribed hanging in our living room. Our dragon proved a different kind of treacherous: living from lab result to lab result, one transfusion to the next. Shining knights didn’t rescue me; I was saved by the two people who sat at my bedside and read me fairy tales. Who refused to take no for an answer. Two women. My mothers.

I’d always understood my family was different. But just like any kids with gay parents, my sisters and I had spent much of our lives reassuring ourselves, in the face of confused looks and whispered questions: “It honestly doesn’t make a difference at all. We’re just like any other family.” And for a long time, I really believed both.

So, I’m here to set the record straight. Gay parents cannot raise children just like straight parents do. Just as well? Absolutely. But not “just like.” The difference is this: I’ve been taught to be a certain type of person, not a certain type of woman. I’ve been raised in a world without gender roles. Okay, not entirely – I have a television after all – but I don’t see gendered stereotypesacted out every day in my own house. It’s not even as simple as one of my moms taking on all the traditionally male chores – because we don’t have a man to do them – while the other cleans and cooks. Karen kills the bugs because Audrey’s afraid of them; Audrey sets mouse traps because Karen’s afraid of those. Audrey is a stay at home mom who changes our tires and hates even online shopping. Karen is a CEO who can shop till she drops. Both claim to have missed out on the “cooking gene.”

We don’t heed obstacles. I’ve learned that I’m far better at rolling than cutting in – when it comes to painting the house, that is; when we need something done, we almost always do it ourselves. When there was a hill where we needed a flat circle for the trampoline, we grabbed shovels and a level and got to work. I can sob uncontrollably during a Nicholas Sparks movie – yes, his plot formula still works on me – and I can drive a moving van or wield a box cutter and haul soaking wet carpet strips following a basement flood.

I hold men and women to the same – very high – standard: care, even when it’s not cool; be vulnerable; don’t wallow in self-pity; hold the door open for people; be kind, but not co-dependent; give your seat to an older person; don’t be lazy; take care of your family; be strong; seriously, quit whining; be the very best you can be, and always strive to be better.

These are the truths I live by, and how my illness got its name: when I was diagnosed with cancer, we didn’t send up a prayer, we sent out a battle cry.

My moms, the lady dragon-slayers, define me more than the dragon ever could. Because of my moms, I’ve learned not to wait for my dreams and miracles, but to draw my sword – or paintbrush or shovel – and fight for them. Because of the dragon, I’m just not waiting to start.” 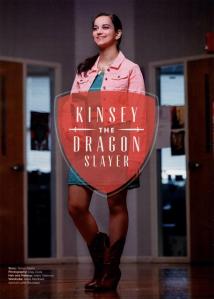